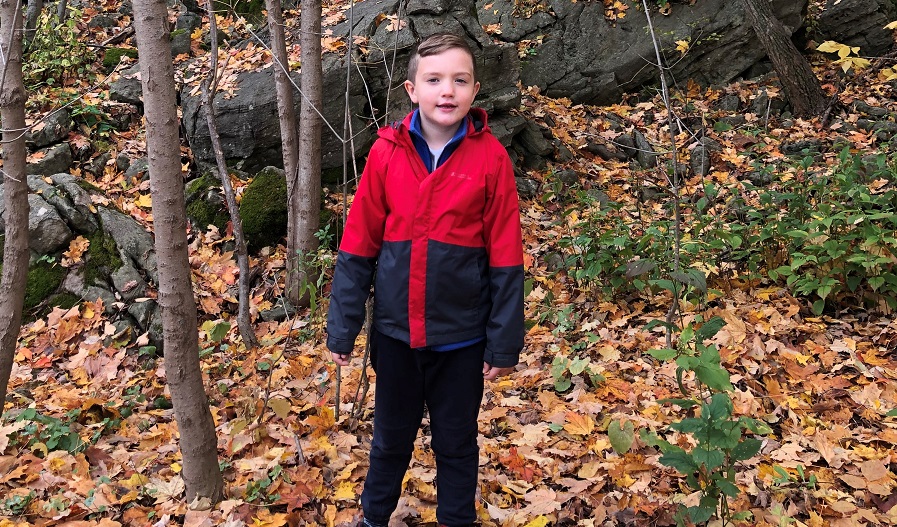 The valuable knowledge and insights gained by researchers at Hamilton Health Sciences can make a real-world difference in the clinical care of patients. Such was the case with young Hugo from Oakville, who began to experience sharp pains in August 2020.

“He said it hurt to move his leg and it was hard for him to walk up the stairs,” recalls Hugo’s mother, Hayley. “Then he started to vomit and cry because his belly was hurting so much.”

After speaking with their family physician over the phone, Hayley followed the doctor’s advice and took Hugo to the Emergency Department at McMaster Children’s Hospital.

“They did blood work and an ultrasound,” says Hayley. “Waiting for the results was the hardest part for me because I didn’t know what to expect.”

The ultrasound revealed that Hugo had appendicitis, which was causing the pain in his hip. If left untreated, appendicitis can lead to a rupture of the appendix and extremely dangerous internal infections.

To Hayley’s surprise, Hugo was scheduled for an immediate appendectomy to remove his appendix.

Hayley is grateful to the Child Life Specialist who explained the situation to Hugo and helped him understand what to expect.

“She was so great at talking to Hugo about what they were going to do,” says Hayley. “He wasn’t even phased at the idea of going into surgery. He might not have stayed so calm if I’d been the one explaining things to him because I was so scared and emotional.”

The procedure took 45 minutes to complete and everything went smoothly. Hugo was kept overnight for observation before being discharged.

“We’re very thankful for the care Hugo received at McMaster Children’s Hospital,” says Hayley. “Within a week of the surgery, he was back to his normal self and running around again.”

Benefitting from research in the real world

This quality-improvement project, which was supported by proceeds from Hamilton Health Sciences Foundation’s 2017 gala, focused on standardizing the care provided to patients suspected of suffering from appendicitis.

Findings from the study led to the increased use of ultrasounds in diagnosing patients like Hugo, which have been found to be more effective than the previous use of CT scans.