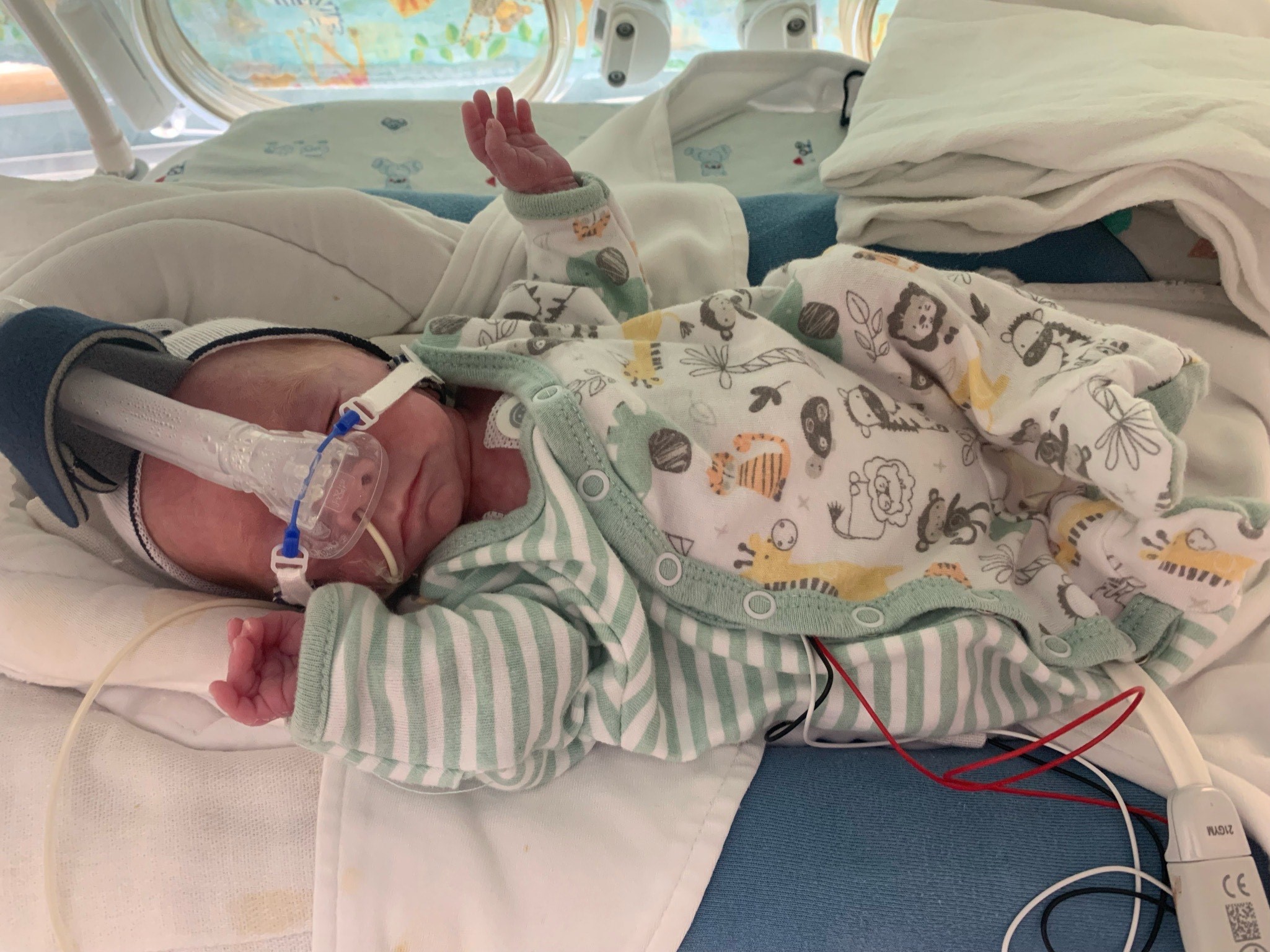 August 9, 2021 started off as another typical day in the life of Sadie Champagne from Burlington. Seven months pregnant with a little boy, Sadie visited her obstetrician for a regular checkup. This led to a journey with McMaster Children’s Hospital that was anything but regular.

“My blood pressure was unusually high, so I was sent to the hospital in Burlington for additional tests,” recalls Sadie. “When they also found unusually high protein levels in my urine, they realized that something was definitely off.”

Sadie was showing signs of preeclampsia, a pregnancy complication that can be extremely dangerous if not treated in a timely manner.

“She called me from the hospital and told me the situation,” explains Sadie’s husband, Stephen. “Over the phone, a nurse said it was very serious and there was a remote chance that both Sadie and the baby could be lost. It was one of the scariest days of my life.”

Into the following day, the medical team at the Hospital worked to stabilize Sadie and her baby, but the unborn child’s heart rate began to fade in and out.

“On August 10, it was determined that an emergency C-section was necessary,” says Sadie. “I was scared because I’d never had surgery before in my life, but the nurses helped me through it by providing emotional and physical support.”

Within a single day, so much had changed in the lives of Stephen and Sadie.

“Just 12 hours earlier, we had no inkling that we would be experiencing all of these unexpected things,” says Stephen. “Reality suddenly hit us – we were really parents now.”

Little John wasn’t totally out of the woods yet and he was moved into the NICU. Because of his prematurity, his lungs weren’t completely developed yet and he required support through a CPAP (continuous positive airway pressure) machine to ensure he was properly oxygenated.

A feeding tube was inserted to deliver the nutrients Little John needed, as his muscles weren’t strong enough for oral feeding yet. He also required a blood transfusion to help boost the hemoglobin count in his blood.

“He’s doing well nowadays,” says Sadie. “We get to celebrate the progress as he keeps moving forward. Right now, we’re focused on strengthening his breathing and getting him to the point where he can feed orally.”

Little John was finally discharged and he went home in November after spending the first few months of his life in the NICU.

Stephen, who works for Dairy Queen Canada, now appreciates DQ’s support for McMaster Children’s Hospital Foundation more than ever. Each year, proceeds from the sale of Blizzards on DQ Miracle Treat Day are donated to the Foundation. These funds support equipment purchases for the Hospital, important research initiatives and the ongoing education of health care professionals.

“You never think you’ll need the services of McMaster Children’s Hospital,” says Stephen. “All of that changed in an instant. I can’t thank donors enough for their support on Miracle Treat Day and making a real difference in the lives of patients like Little John.”

Sadie and Stephen now have a strong connection to the Hospital that will last a lifetime.

“We’ll always be thankful for everything they’ve done for us,” she says. “It’s reassuring to know that McMaster Children’s Hospital is always there when we need it.”