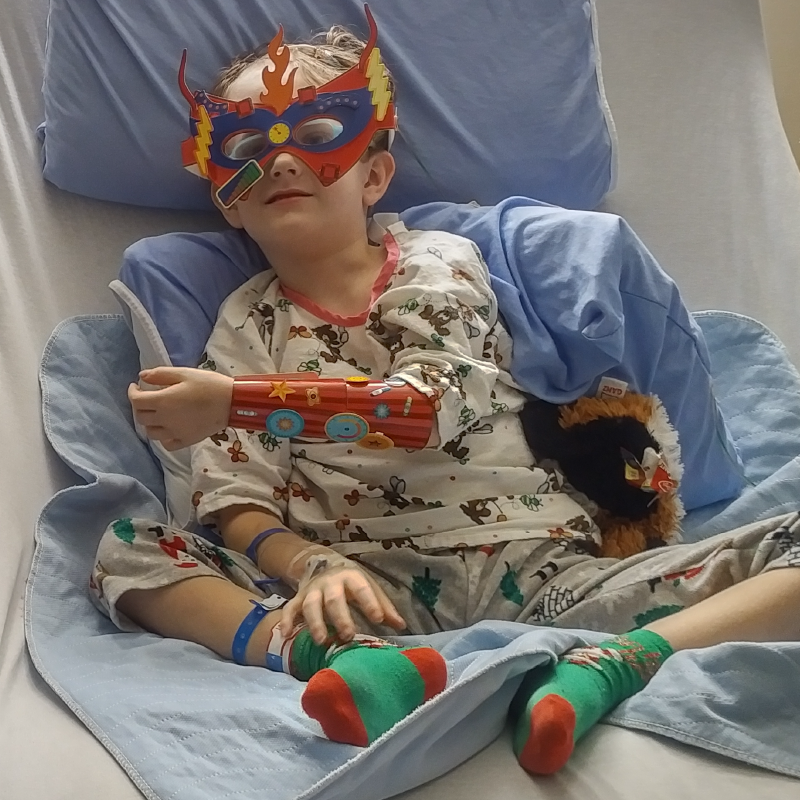 “I could see that something wasn’t quite right, and it kept getting worse.”

“I could see that something wasn’t quite right, and it kept getting worse.”

Stacey from Milton remembers September 2018, when her five-year-old son, Ethan, started becoming unsteady on his feet. He would sway back and forth with dizziness. Stacey decided to take action and she took him to the Emergency Department at McMaster Children’s Hospital.

“I had to carry him into the building because he couldn’t even sit up on his own,” Stacey recalls. “After a CT scan, we were shocked to discover that a tumour was growing in his brain. It was blocking the circulation of his spinal fluid, which was causing hydrocephalus.”

Ethan was admitted to the Hospital, where he underwent surgery to relieve the build-up of fluid in his brain. Additional surgeries were conducted to implant a shunt – a drainage system that keeps fluid flowing at the proper rate.

“It was hard watching him go through everything. As a parent, you’d rather have it happen to you instead. The feeling of helplessness was really difficult.”

Because of its location, surgery was not a viable option to remove the tumour. A port was inserted into Ethan and he began a regimen of chemotherapy.

“We were just getting to the end of his chemo in February 2020 when the tumorous cells started spreading throughout his cerebral spinal fluid,” explains Stacey. “Ethan began new chemo treatment via lumbar puncture, so he received the medicine directly into his spinal fluid instead of through his port. Luckily, that stopped the spread of the tumorous cells and kept things at bay.”

Today, Ethan takes oral chemotherapy and his cancer has remained stable. He suffers from some loss of peripheral vision, but he’s doing well and is no longer experiencing dizziness.

“The care we received at McMaster Children’s Hospital was incredible,” says Stacey. “Ethan, along with his brother Edward and two of their friends, began to fundraise because they wanted to give back.”

The group enthusiastically fundraised by selling homemade bath-bomb kits and calendars. Their efforts raised more than $10,000 for McMaster Children’s Hospital Foundation – an amazing accomplishment for the young team.

“When we’d go to the Hospital for an appointment, Ethan would put on a suit and bowtie to deliver bath-bomb kits to the units that had ordered some,” says Stacey. “I’m so proud of them for all their hard work.”

Ethan’s philanthropy continues – he is excited to be fundraising as a Patient Ambassador for MacKids Walk & Wheel, the annual signature event in support of McMaster Children’s Hospital Foundation.

“We’re proud to continue our support of The Foundation as a Patient Ambassador Family for Walk & Wheel, and we look forward to seeing you at Bayfront Park in June!”