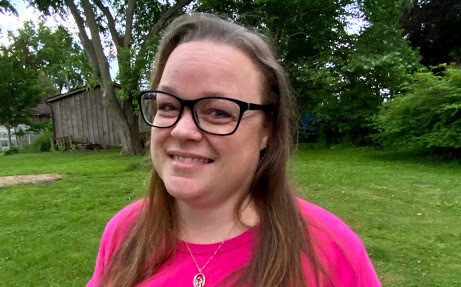 The Jersey Girls: A Fundraising Tradition for Cancer Care

“We nicknamed ourselves the ‘Jersey Girls’ because we’re from Jerseyville and some of us are even dairy farmers.”

Cancer has affected Shannon Revill in more ways than one. Although Shannon has never been diagnosed with cancer herself, she has felt the devastating impact of the disease through loved ones.

“My grandmother passed away after a journey with cervical cancer when I was 16,” recalls Shannon. “And my mother was diagnosed with breast cancer a few years ago, but thanks to the great care she received at Juravinski Hospital and Cancer Centre, her cancer is in remission.”

In 2011, Shannon started thinking about ways she could raise money to support cancer care for other patients and families in the region.

“I wanted to make something positive out of a negative after my grandmother passed away,” explains Shannon. “I realized that everyone is touched by cancer in one way or another and I wanted to help other families dealing with cancer.”

With a closely knit group of friends, Shannon formed a team that could fundraise and support cancer-related charities.

“We nicknamed ourselves the ‘Jersey Girls’ because we’re from Jerseyville and some of us are even dairy farmers.”

The following year, the Jersey Girls rented a church and held a fundraising spaghetti dinner to raise money in support of cancer causes. Thus began an annual tradition that has snowballed in popularity.

Their first spaghetti dinner, which raised $600, was a wonderful success. When the Jersey Girls decided to hold another spaghetti-dinner fundraiser the following year, it was even more successful.

Starting in 2015, the Jersey Girls began to fundraise specifically for Juravinski Hospital and Cancer Centre Foundation. The annual spaghetti dinner was a fun and inspiring way to honour her grandmother’s memory and support cancer care in south-central Ontario.

“Every year, the dinner became more popular and raised more money,” says Shannon. “Soon, we had to rent the entire hall at the Ancaster Fairgrounds because so many people wanted to participate.”

In 2018, the Jersey Girls participated in the first annual Illuminight fundraising event – a magical evening of friendship, food and fun under the stars to celebrate all of our journeys with cancer.

“It’s inspiring to see people from communities throughout the region come together for this great cause,” says Shannon. “We’ve been proud to fundraise for Illuminight every year since.”

Through their fundraising activities since 2015, the Jersey Girls have raised more than $60,000 in support of Juravinski Hospital and Cancer Centre Foundation.

Because of the pandemic, Illuminight will be a virtual event in 2021. But that won’t slow down the Jersey Girls, who recognize the ongoing need for fundraising and are supporting the event with renewed dedication and vigor.

This year, Shannon will represent her fellow Jersey Girls as one of Illuminight’s official Ambassadors.

“I’m truly honoured to be an Ambassador for this year’s event,” she says. “The Jersey Girls are determined to make a difference in the lives of patients and families on the cancer journey, and we hope to inspire others to participate and fundraise as well.”